Mom woke up early Sunday morning with stories tumbling out nearly faster than her lips could handle.

“Oh, you’re there,” she said, spotting me in the living room on my recliner doing research on my laptop computer. “I’ve been telling you life stories all morning.”

Mom settled down on the opposite end of the sectional sofa before continuing. “Do you know what happened to your yellow dress?” she asked.

Expecting the usual stories set in her childhood and the 1940s and 1950s, such a query was a surprise. 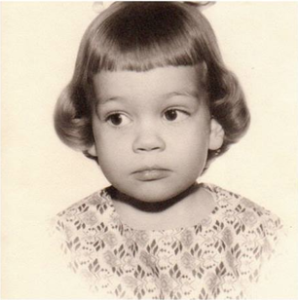 It’s not clear whether this is the yellow dress my mother remembers, as this photo was not taken in color. It is, however, from the same time period.

On most days, tales of my childhood escape her memory. She has trouble accessing much past 1970. It’s as if the entire experience of having raised me has been slowly erased by time. On this day, however, she spoke about the house high on a hill in Great Falls, MT, where she and my father lived with my two elder brothers when I was born. She reminisced how excited everyone was when I arrived.

“‘It’s a girl! It’s a girl!’” Mom said everyone had exclaimed, from hospital nurses to the doctor and–of course–my now late father.

In years past, the storyline suggested that it was actually my father who had made such a proud proclamation. There is even a poem he wrote titled just that. Maybe in this re-telling, my mother felt excited enough about the event to embellish a tad. Or maybe her memory was just so gleeful that she really felt as if even the walls were indeed singing “It’s a girl, it’s a girl. A sweet little girl.”

Wanting to make my mother comfortable, I brought in the small table she’d received just weeks before from two of her granddaughters. I told her how serendipitous her timing was in wanting to share stories considering I had been up late the night before working on launching this blog, DaughtersandMoms.com. I showed her the YouTube videos she’d recorded about six months after moving in and the photos of her trip to the hair salon. I also showed her the page devoted to the recent visit of granddaughters Jennifer and Jasmine and her daughter-in-law, Janethe.

They might as well have been photos of space women.

At first, I wasn’t overly concerned. This is the new normal for Mom. She remembers things for a short time. Then they are gone. It’s one of the reasons I have been taking so many photos of otherwise ordinary things–like going to the doctor or enjoying a Big Mac.

My desire was to turn on the videocam and capture some of Mom’s stories. The sun wasn’t yet up and I have yet to replace the blown fuse for the light in the living room. So that wasn’t really an option. Besides, Mom had just crawled out of bed and needed to at least comb her hair. I suggested that we get her prettied up so when it was light out that we could record family history.

“Why, are we going anywhere?” she asked.

Besides, the stories were starting to get a bit jumbled. I wasn’t sure I wanted to record her saying things that were a mixture of truth and once strong memories stained by the color of time.

Instead, I turned on the television and changed it to the BYU Channel. General Conference was about to start and my mom did not want to miss a second. I surprised my mother with a cold slice of chicken and ham pizza I had ordered from Dominoes the night before. She seemed happy. Content, even.

As usual, my mom chit-chatted during the sermons. Every time someone spoke a word that triggered a memory she’d tell a story. Most of the stories were repeated numerous times throughout the session, as if each telling was the first.

Between sessions I decided I would take a nap. I hadn’t planned on being up and staying up so early. I was actually going to go to bed just before my mom came in so eager to visit.

But there was no nap. Instead, my mother peeked in my room and asked when I was going to take her home. She was wearing a sweater and had her cane.

“You’re already home,” I said, trying to turn over and go to sleep.

That’s when things got strange. Without going into detail, let’s just say my mom became extremely confused and became angrier by the minute each time I tried to assure her that she was indeed home, and that she had lived here for two years.

Calls from two of her grandchildren and a personal visit from a third would not convince her. She even asked our bishop, whom I invited over to offer comfort and support, could not convince her that this is where she belonged. She offered to give him gas money if he would drive her to 35th Avenue and Camelback Road so she could find the rest of the way home.

Our bishop asked if she would settle for a blessing instead and put off any trips until tomorrow. He blessed her with the ability to find peace and feel safe in her surroundings and assured her that she was loved by her Heavenly Father, her bishop and the daughter who has been taking care of her for some time now.

It was enough to get her to agree to go to bed.

I sincerely hope this passes. But my mom is very confused right now and as of this morning was still asking to be taken home. Her first words to me this morning were, “When do I get out of this joint?”

I am concerned for her safety and will be speaking with her medical providers about what can and should be done. I am home on leave related to the stress this situation causes me personally and am working on making arrangements in both of our best interests.

At the very least, this is a significant sign post along my mother’s journey. If things don’t get better, it could become a cross road as we move on to the next phase of her life.

Please pray for her. It’s what she would want.

RuthAnn Hogue is the owner and founder of Whiptail Publishing’s WebTechGirl.com and BookTrailerCentral.co. She is an award-winning author and journalist with an Internet Marketing Master of Science and a B.A. in Journalism/Political Science.