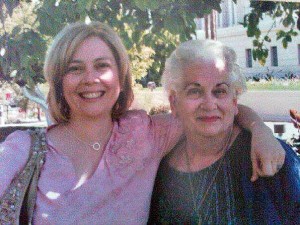 Naomi Ruth Terry Hesterman of Murray, Utah, died March 23, 2016. She was 81. Mrs. Hesterman, a retired homemaker, was born in Salt Lake City May 22, 1934. She lived most of her life in Phoenix, Ariz., where throughout the years she attended several wards of the Church of Jesus Christ of Latter-day Saints. For decades she walked daily to run errands to maintain her long-time home in the 3600 block of West Orange Drive. Mrs. Hesterman was most proud of having read the Book of Mormon, another testament of Jesus Christ, more than 80 times. She bore her testimony monthly for as long as she was able, which was up until the last two years of her life. Next to the gospel of Jesus Christ, Mrs. Hesterman most loved her sweetheart, Lenny. They met at a tri-stake church dance and fell quickly in love as he wooed her by dedicating an entire radio show to her on her birthday. They married in the Salt Lake Temple September 17, 1956. Throughout their marriage he would whisk her away in waltz steps at every opportunity. She considered him the most romantic man in the world. Mrs. Hesterman worked at Primary Children’s Hospital as a nurse’s aide and took classes at LDS Business College before becoming a wife and homemaker. As a homemaker, she designed and sewed most of her wardrobe, baked homemade bread weekly, kept the house filled with fresh oatmeal raisin cookies and always had at least a loaf or two in the freezer of applesauce cake in case guests dropped by. She was an avid reader and master of all crafts—based on necessity. If it broke, she’d find a way to fix it. She was kind to animals, which prompted a book about two mockingbirds she and her family rescued. She was a prolific contributor to the “Ensign” church magazine and “The Reader’s Digest” with tidbits. Mrs. Hesterman is survived by five children; Bryce (Mary) of Redmond, Wash., Scott of Rock Hill, S.C., RuthAnn Hogue of Maricopa, Ariz., Lynda (Kevin) Zollinger of Reno, Nev., and David of Johnstown, Colo.; and many grandchildren and nieces and nephews. She is also survived by four sisters. Virginia Terry, Velma Terry and Jennette Terry and Genevieve Lougee of Salt Lake City; a brother, Roy (Carol) Terry, of Salt Lake City; and sisters in law Barbara of Murray, Utah, and Joanne of Phoenix, Ariz, and Marian Terry of Cedar Falls, Iowa. Mrs. Hesterman is preceded in death by her husband, Leonard “Lenny” Hesterman; two brothers, Victory LeMar Terry, Jr., and LeVon Terry; a granddaughter, Micayla Zollinger; and a grandson, Jayce Skehan.