This is us. My mother requested that this photo be taken of the two of us, which is probably why it is among my favorites. She had moved in with me only three months before and was extremely grateful to become a member of my household.

I’ll share my professional bio in a moment. Meanwhile, here’s hers. 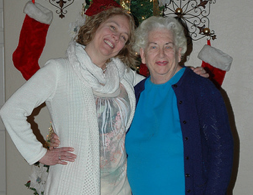 Naomi Ruth Hesterman has been published for decades in church and secular publications with everything from slice-of-life commentary to featured letters to the editor.

At age 75, she released a book of her own, including her original art work inside and out. Support Naomi in this courageous endeavor by ordering a for copy of “To Save a Mocking Bird” for Kindle today.

Naomi is the proud mother of five grown children, 18 grandchildren and six great-grandchildren. She was born in Salt Lake City and resides in the greater Phoenix, Ariz., area where she has made her home since 1970.

In “To Save a Mocking Bird,” Naomi shares her family’s experience raising wild birds. We’re not talking about throwing seeds in a cage and changing the newspaper.

No, this bird sometimes flew into the kitchen and took a bath in your cup when you were trying to eat lunch. It learned to sing popular radio songs.

It restored peace to a home.

All of this and more is in the book, a title of Whiptail Publishing, featuring Naomi’s original paintings and sketches of the birds and the family dog, King.

This is a great read for anyone who loves animals, and can relate to the concern of a parent who feels estranged from a rebellious teenager.

The underlying message is that the common love of a wild creature helped make her brood, well, a little less wild themselves.

Find out for yourself by ordering a copy today. Be sure to order a few extra for gifts. You’ll be glad you did.

RuthAnn Hogue is the first-place recipient for nonfiction books, memoir, in Arizona Press Women’s 2006 Communications Contest. Goodbye, Walter advanced to earn second-place in national competition with the National Federation of Press Women. She accepted the award in Denver in September 2006.

Today, she earns a living providing professional hosting service technical support in addition to small business consulting. Hogue is also the founder and owner of Whiptail Publishing which sponsors booktrailercentral.co and webtechgirl.com.

She is devoted to her family, which she says always comes first.

Hogue has also captured numerous awards for her work as a journalist including many first-place prizes. Notably, the Arizona Newspapers Association in 1997 honored the Daily News-Sun with a first-place award in its class for Journalistic Achievement for “The Journey Home: Diary of a terminal cancer patient.” Hogue was so touched by the experiences she shared with Walter and Lillian Schifter while reporting the series that she felt compelled to convert it into a book.

The result, Good-bye Walter: The Inspiring Story of a Terminal Cancer Patient, has been published by Mapletree Publishing Company, an imprint of Wind River Publishing.

Hogue, born in 1962, is the mother of five children. A goal she set in 1990 to become published led to a story in a national church magazine. She used the $40 she received to pay for a summer newswriting course, which set her firmly on the pathway to becoming a professional writer and editor. She enrolled in college in 1993 and graduated in August 1997 from Arizona State University with a bachelor’s degree in print journalism and a minor in political science. She received several prestigious scholarships while attending ASU’s Walter Cronkite School.

In addition, she wrote for local newspapers, the college newspaper and reported the evening news live for the campus radio station while attending school. Hogue landed her first full-time reporting position in December 1996 with the Daily News-Sun, and by November 1997, had been promoted to an editing position. Before that, she had already done much award-winning work as a part-time news assistant for The Arizona Republic and The Phoenix Gazette while attending journalism classes.

In spring 2000 as Neighbors editor for the Arizona Daily Star, she implemented a plan she developed to produce and publish daily micro-local news specific to nine geographic areas. She later went on to accept a city editorship at the Sierra Vista Herald/Bisbee Daily Review newspapers where she doubled as a writing coach. She has been news editor of the West Valley View and managing editor of the Gilbert, Chandler and Queen Creek editions of Independent Newspapers in the greater Phoenix area.

In addition, Hogue has taught journalism and writing courses for the University of Arizona and occasionally teaches workshops on time management. She has also taught high school journalism and English and contributed columns to The Arizona Republic’s Southwest Community section.